Who among car lovers does not dream of plunging into the world of olden times, retro cars, knowing the design of these cars, or making your old dream come true – to get an old retro car? We can also provide you with drawings of the models of Morgan 1909 – 1910 – 1912. This is the first replica we built by creating drawings from photographs.

The Avtoproject team is ready to bring you closer to this goal by offering turnkey production of this retro car or sale of blueprints for self-assembly.

The inexpensive yet still awesome replica of Morgan Runabout 1909 prototype. It can be powered with an electric engine. Bicycle pedals can be added if necessary. Great toy for children and adults and also a desirable guest for every exhibition! 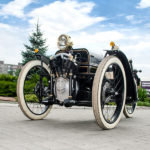 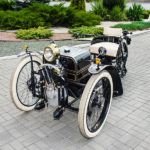 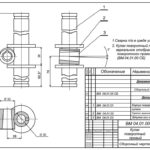 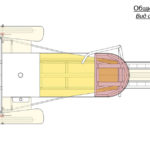 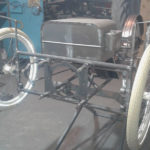 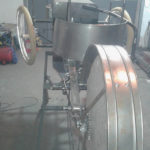 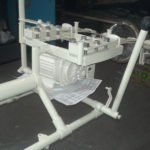 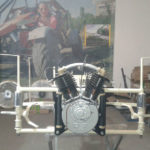 Photo of the engine 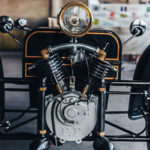 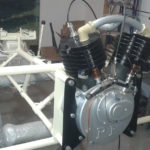 How we made a replica «Morgan Runabout 1909»

Being a fan of retro-cars, our client always wanted to have one (for cheap, of course). First he thought he could have a replica of Morgan Three Wheeler Super Sports.

But after reviewing our local laws he understood that if he wants to have a road legal vehicle, it should have electric engine (less than 3kwt) and pedals (to be considered as a bicycle) – then it won’t require a number plate and driver license. From Morgan tricycles line, only first Morgan Runabout 1909 is capable to match these requirements somehow. So, he found our company, and we started the project.

We developed the drawings from photos, and started buying the details and working on the frame. The blueprints phase started in June 2016, actual work started two months later. We used parts from old soviet cars and bikes, a lot of metal tubes. Client purchased an old acetylene lamp which was converted to a modern headlight with high and low beam capability. First we planned to install bicycle disc brakes, but later we had to install scooter disc brakes as they were more powerful.

The vehicle has bicycle pedals and chain for driving without battery. It is also has a 1500w electric motor wheel hub installed into the rear wheel, and 60v30ah battery which provides about 50km per one charge. The battery is removable and can be carried to the nearest power socket to charge.

The replica was finished in the beginning of September 2017. It won a diploma for best replica at OldCarLand Exhibition in Kyiv (Fall 2017), also it attended a few smaller local exhibitions and it was a subject for video reports at several Ukrainian TV channels.

In the beginning of the summer this year the vehicle has been sold to the private collection in Germany.

Drawings Morgan on our site

New on the site

Dimensions of standard units and parts of serial vehicles

Here you can see photos of serial car parts, as well as their sizes.

It really helps to save your time!